March 12, 2013
So pretty much as soon as I published my last post, discussing over training and the symptoms to look for, I promptly ignored that I wasn't sleeping well, continued to train, and developed a little tendonitis in my left elbow. Many climbers will be familiar with this condition - pain inside the elbow joint. Its caused by over training, typically, and is treated with rest, active recovery, and RICE (rest, ice, compress, elevate).

I'll quickly discuss why this is such a frequent injury for climbers. There's something called the medial epicondyl of the humerus, which is a junction where many tendons attach to bone, including the biceps and some of the tendons used to support flexion in the forearm (grabbing holds). When climbing, we typically rotate our hands towards the wall, which puts a little more extension on the forearm tendons attaching to the epicondyl, and though the arm may be straight or bent, we are almost always contracting the biceps, which pulls on the epicondyl in the opposite direction. Using a progressively more closed grip progressively puts more stress on the epicondyl. So to put it all together, if you climb a lot of crimps on faces, you are prone to "climber's elbow." I've also found that the campus board is an exercise that can focus a lot of stress on the epicondyl. With the campus board, the loads are obviously very high, and the wrist position and bent elbows focus a lot of the load on the epicondyl.

So back to my situation, I ignored my over-training symptoms, and continued with campus board sessions. I ended up with mild climber's elbow. The thing with any tendonitis is that you can't just keep training through it, or it will get worse. You have to let your body rest. But also you can't just rest 100%, as this doesn't stimulate the affected area to heal. So its a balance between continuing to train, and resting. I've found that you have to push injuries in a controlled way - don't be too shy about testing yourself when recovering from an injury. But the crucial point is to allow yourself time to recover between workouts. Depending on the injury, two or three days rest between workouts can be a very good idea.

I attempted to rest, and use active recovery, but my condition did not improve. Its a difficult area to ice as well, and easy to give up on an ice regimen, especially since I don't have a staffed training room supporting me...

At about this time I read a review in Climbing Magazine for the 110% Alchemy Arm Sleeve. I was willing to try it, given the glowing review, and given that I wanted to get back to training! Since it arrived, I've been using it following training sessions, and some mornings while I'm making coffee and brushing my teeth. Almost immediately my tendonitis symptoms became negligible and I've been back to a full training schedule with no lingering issues. This thing is a miracle, and if you suffer from climber's elbow you have to have this device!

Enjoy some totally unrelated pictures of +Adam Scheer in Bishop: 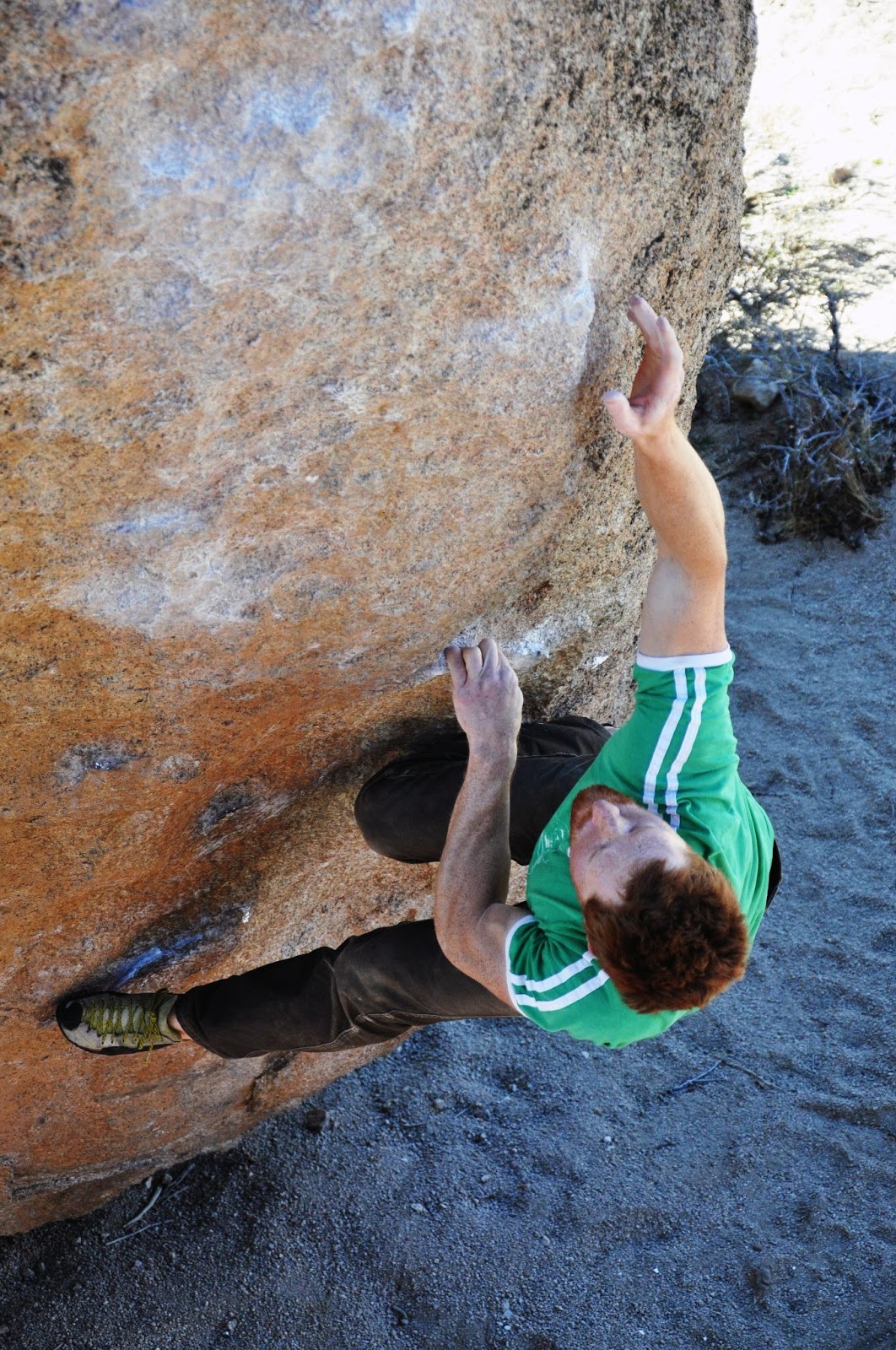 One of my favorite workouts is a really good climbing strength endurance pump out. One thing to note about this type of training, is that lactic acid is toxic for the muscles. Long term exposure to lactic acid can be detrimental to strength gains. Additionally, one does not need to do this type of training for long periods to see gains, and diminishing returns can onset quickly. So this type of training should be moderated. I'll usually do these workouts leading into the peak of a macrocycle, once a week, for four or five weeks in a row. If I haven't been training endurance, and I'm going to get on some ropes, I'll usually do this workout several days before the first day on. What happens when you do the 4x4 workout, is your are forcing your muscles into a severe anaerobic energy consumption mode, producing lots of lactic acid. The lactic acid builds up in your muscles and you get pumped. In doing this, your muscles build up a tolerance to the lactic acid, and the

I seem to always be recovering from a finger injury, and I'm not entirely sure what to attribute the frequency of my injuries to. I'm sure the age at which I started climbing has something to do with it. Starting when I was 28 has made it difficult for my connective tissue to cope with the gains I've made in strength over the last 8 years, though at this point I generally feel that I'm able to really try hard without my tendons popping. Surely being injured so much is also due to me pushing myself too hard too often, and not recognizing when I'm in an overtrained state. See my article on overtraining for more on that. There is one thing I know for sure. Bouldering is very hard on the body, and on the connective tissue of fingers specifically, and injuries are very much a reality for many climbers. Obviously its very frustrating to be injured, but finger injuries don't have to mean taking months off. A combination of active recovery and contrast bath therapy c